Ample is an especially challenging asset for holders at this stage of its lifecycle. While the medium and long-term potential of Ample is bright, until the asset gains more steady, organic demand, it will continue to fluctuate around its “peg” and spend periods of time in both positive and negative rebase cycles, which has benefits and drawbacks for investors.

Mature financial ecosystems feature numerous products that provide options to invest in, speculate on, or use assets in ways that reduce the risk of capital loss. The Ampleforth Ecosystem currently lacks products such as these.

Also, Ample’s ability to organically increase its liquidity has not yet been fully appreciated or maximized in decentralized financial products. This is because Ample is not yet being used a fundamental part of a DeFi/Elastic Finance protocols in ways that take advantage of its unique strengths.

Representative money has a long history in economics. For example, for about a century in the United States, silver certificates were issued, which gave the bearer the right to claim a certain amount of silver upon presenting the dollar at a bank. Representative monies are paired with commodity monies because they can be exchanged for the commodity (such as gold or silver).

Ample is a digital commodity money and is thus an very appropriate asset to pair with a representative money.

wAMPL would be a form of representative money that always entitles the bearer to claim a certain amount of AMPL, in this case 1 wAMPL = 100 AMPLs. 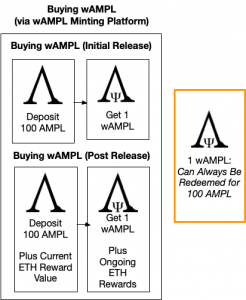 But, unlike physical representative monies, wAMPL would have an additional benefit: Because the asset is backed by an expansionary elastic currency (AMPL), wAMPLs would also produce passive income for holders. Also, AMPL sold during positive rebases would help to maintain the wAMPL system.

The wAMPL protocol would generate benefits for each participant in the system:

It is also likely that wAMPL would be utilized across DeFI protocols, creating other opportunities for holders to benefit from lending, borrowing and trading — all while maintaining exposure to AMPL in a risk-minimized fashion.

The process of minting wAMPL would also drive organic demand for AMPL, and lock up more of the currency, which could lead to longer periods of expansion, benefiting Ample holders.

The system would have the following components:

Examples of similar ideas: The wAMPL system has similarities to MakerDAO (in terms of kMPL holders serving as the ultimate backstop of the system) and cDAI, aDAI, which provide owners with interest income and are tradable. It is likely that we would look these systems while developing the smart contracts.